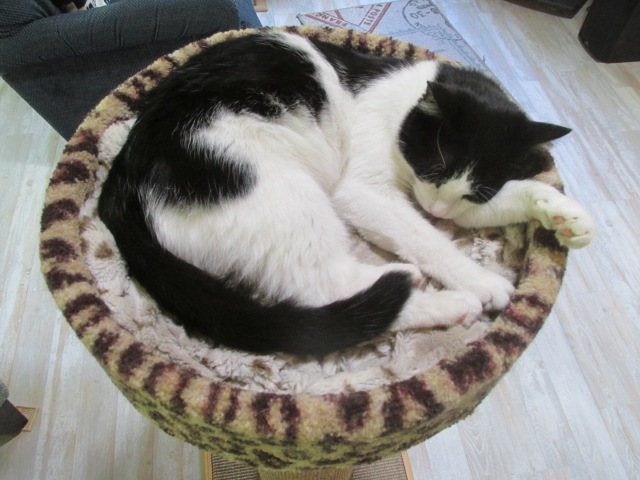 I, Flyboy the Magnificent, am pleased to announce the publication of my first book, I AM FLYBOY. Write The Dunery Press at P.O. Box 116, Harbert, MI 49115 for a free, autographed copy.

I AM FLYBOY
Volume One: A New Cat on the Block

I AM FLYBOY
a cat’s life
by Flyboy the Magnificent

Chapter One: In the Beginning

In the beginning, I was born on March 24, 2019, on a farm in Berrien County, Michigan, not far from the lake they call Michigan.
I don’t remember being born, but I do remember the man from animal control who came and brought my sister, Kitty, and me to the Humane Society of Southwest Michigan. It’s out there on M-139 if you want to check.
Kitty and I were put in the same cage in a row of cages full of kittens. I guess you could call it Kitten Row. That’s where they put us, and they fed and watered us and changed our litter just fine. The staff were all great, especially that guy with the bushy red beard. He was the best.
But then one day these people came and pointed at Kitty and said she was just the calico kitty cat they wanted for their little girl. They wanted a kitty cat to grow up with their baby girl.
How cute.
And Kitty was cute.
No, SHE IS CUTE.
And if you’ve never seen a calico cat before, then you should go out and find Kitty, because she is the cutest calico cat you ever did see.
Oh, a calico cat, according to my human’s desktop dictionary, is, by definition, covered with spots of different colors. You could do that with a quilt, I suppose, and then you could call it a calico quilt.
Aren’t I smart cat?
A smarty cat?
Yeah, that’s me.
Anyway, Kitty is covered with spots of different colors, and I can just picture her being happy in her new home.
Good for you, Kitty.
And, yes, I miss you so, so, so, so, so, so, so very, very, very much.
So there!
And when those people adopted you and took you away from me, I despaired and almost stopped eating and drinking. But then one fine fall day, this man with another bushy beard walked by my cage. Hey, I had developed a liking for men with beards by that point. Remember?
Well, I was so excited I reached my little paw out to him and let out a great big MEOW!!!!
He stopped in his tracks and talked that dumb human talk to me. Like I could understand or something.
But I knew he wanted to see me in the Meet & Greet Room, and he did.
And that’s where I met him and his lovely wife, and that’s where I got my way-cool name:
FLYBOY.

Charles McKelvy lives and writes in southwest Michigan with his wife and fellow writer, Natalie McKelvy. They established the Dunery Press in 1988 in order to publish their own fiction. They continue to do so to this day. Charles McKelvy is an Eagle Scout.
View all posts by charleymckelvy →
This entry was posted in cats, cute cats, Flyboy and tagged cat books, cat stories, I am Flyboy. Bookmark the permalink.

This site uses Akismet to reduce spam. Learn how your comment data is processed.